, /PRNewswire/ --  (NYSE: AAN), a leading omnichannel provider of lease-purchase solutions, and its divisions and , today announced the launch of the "Aaron's Scholars Program," created to provide students who are the first in their families to enroll in college with financial support and internship opportunities. 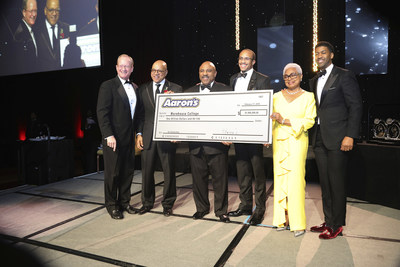 The Aaron's Scholars Program will be underwritten by a gift benefiting 20 students at through 2022. Each student in the program will receive a 3-year, scholarship. The first series of scholarship recipients will be announced in late April at the annual E.B. Williams Awards Banquet. Students will be selected from three departments: Humanities, Business, and Science and Mathematics.

"It is heartwarming and inspiring to young men to be the first in their families to attend college and is proud to assist them as they endeavor toward this high academic achievement at Morehouse," said , CEO of " is a historic institution in our hometown of and the Aaron's Scholars Program is our way of giving back and advocating for our future community leaders."

Morehouse President . Thomas said the College appreciates the support of corporate partners like that believe in Morehouse's mission and unique space in developing global leaders.

" appreciates the contribution to support student scholarships," Thomas said. " investment will be a great help to young men who dream of earning college degrees to uplift their families, impact their communities, and change their economic futures. I look forward to working with in this partnership and following the success of our Aaron's Scholars."

To qualify for the Aaron's Scholars Program, students must maintain a 2.5 GPA, submit a letter of recommendation from a faculty advisor, and have received enough credit hours as a full-time student to be considered a second-year student.

"Nationwide trends show tuition and fees are rising at a faster rate than the financial aid and family income needed to cover costs, and is committed to helping highly qualified students who are the first to attend college in their families graduate with a bright future," said Robinson.

has a long legacy of giving back to communities, a commitment that began with the Company's founder 63 years ago. Today, is more committed than ever to improving the lives of young men and women who are college-bound and helping them "Own the Life They Want."

Morehouse, the world's only historically black college for men, has been grooming primarily black men for global leadership and service for more than 150 years. The liberal arts college began in the basement of in , as , a place where former slaves were prepared for careers in ministry and teaching. Since then, Morehouse has moved to and produced four Rhodes Scholars, a number of college presidents, and many other leaders. In fact, the ranked Morehouse as the producer of black men who receive doctorates in education, life and physical sciences, math and computer sciences, psychology and social sciences, as well as humanities and the arts.

continue to distinguish themselves in business, the arts, politics, education, journalism, and science because they strive for excellence and are committed to community service. The College has produced many prominent graduates, including and .

About , Inc.
Headquartered in , (NYSE: AAN), is a leading omnichannel provider of lease-purchase solutions. Aaron's Business engages in the sales and lease ownership and specialty retailing of furniture, consumer electronics, home appliances and accessories through its more than 1,700 Company-operated and franchised stores in 47 states and as well as its e-commerce platform, Aarons.com. In addition, , a virtual lease-to-own company, provides lease-purchase solutions through approximately 27,000 retail locations in 46 states. , d/b/a the HELPcard®, provides a variety of second-look credit products that are originated through federally insured banks. For more information, visit investor.aarons.com, Aarons.com, ProgLeasing.com, and HELPcard.com.

About Morehouse College
Ranked America's fifth "" by in 2015, is the nation's largest liberal arts college for men. Founded in 1867, the College enrolls approximately 2,200 students and is the nation's largest producer of black men who go on to receive doctorates. Historically, Morehouse also has conferred more bachelor's degrees on black men than any other institution in the world. is one of the two top producers of Rhodes Scholars among HBCUs. Prominent alumni include: , Nobel Peace Prize Laureate; Dr. , former U.S. Surgeon General; Shelton "Spike" Lee, award-winning American filmmaker; , the first African American mayor of ; and , former U.S. Secretary of Homeland Security. Morehouse currently has more than 16,000 alumni in 40 states and 14 countries.