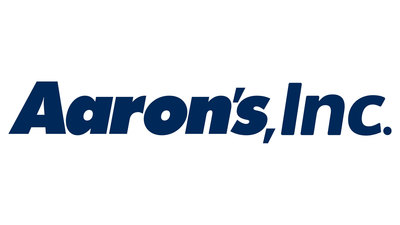 "This quarter demonstrates the strength of our model as we achieved solid growth in both revenue and earnings while we continued to invest in the future growth of our business," said , Chief Executive Officer.

"Progressive achieved 32% EBITDA growth on a 27% increase in revenue, driven by strong invoice volume growth, consistent portfolio performance, and well-managed expenses. In addition, the team continues to execute on the conversion of our robust retail partner pipeline," continued Mr. Robinson.

"The Aaron's Business delivered improved same store revenue performance in the quarter, and year-over-year recurring revenue written into the portfolio was positive for the third consecutive quarter. I am proud of the team as they balanced the onboarding of 90 newly acquired franchised stores with the advancement of our business transformation. We continue to be encouraged by the improvements we are seeing in the business and the results of these initiatives," concluded Mr. Robinson.

The Company generated in cash from operations during the nine months ended September 30, 2018 and ended the third quarter with in cash, compared with a cash balance of at the end of 2017.  During the quarter, the company used for the acquisition of 90 franchised locations. Also during the quarter, the Company returned to shareholders through the payment of dividends as well as the repurchase of common stock totaling 675,552 shares for , or an average price of .  The Company has authorization to purchase an additional of its common stock.

On , the Company amended its revolving credit facility and term loan agreement primarily to increase the term loan by , to . The Company intends to use the incremental borrowings for general corporate and working capital purposes. The Company also amended its franchise loan facility to reduce the total commitment amount from , and extend the maturity date to October 23, 2019.

Lease revenue and fees for the three months ended September 30, 2018 increased 5.4%  compared with the same period in 2017.  Non-retail sales, which primarily consist of merchandise sales to the Company's franchisees, decreased 21.4% for the three-month period ended September 30, 2018 compared with the same period of the prior year.  The decline is attributed primarily to the franchise acquisitions completed in 2017 and 2018.

Write-offs for damaged, lost or unsaleable merchandise were 5.4% of revenues in the third quarter of 2018 compared with 5.2% for the same period last year.

Consolidated lease revenues and fees for the three months ended September 30, 2018 increased 16.6% over the same prior year period.  Franchise royalties and fees decreased 8.9% in the third quarter of 2018 compared with the same period a year ago.  The decrease in franchise royalties and fees was the combined result of the lower number of franchised stores and decreases in revenues generated by the Company's franchisees.  Franchise revenues totaled for the three months ended September 30, 2018, a decrease of 27.6% from the same period for the prior year.  Same store revenues for franchised stores were down 3.1% and same store customer counts were down 3.5% for the third quarter of 2018 compared with the same quarter in 2017.  Franchised stores had 306,000 customers at the end of the third quarter of 2018.  Revenues and customers of franchisees are not revenues and customers of the Aaron's Business or the Company.

The Company is reaffirming and tightening its segment and consolidated 2018 annual outlook.

The Company will hold a conference call to discuss its quarterly results on Thursday, October 25, 2018, at .  The public is invited to listen to the conference call by webcast accessible through the Investor Relations section of the Company's website, aarons.com. The webcast will be archived for playback at that same site.

Headquartered in , (NYSE: AAN), is a leading omnichannel provider of lease-purchase solutions.  provides lease-purchase solutions through more than 20,000 retail partner locations in 46 states.  The Aaron's Business engages in the sales and lease ownership and specialty retailing of furniture, consumer electronics, home appliances and accessories through its 1,699 Company-operated and franchised stores in 47 states, and , as well as its e-commerce platform, Aarons.com. , d/b/a the HELPcard®, provides a variety of second-look credit products that are originated through federally-insured banks.  For more information, visit investor.aarons.com, Aarons.com, ProgLeasing.com, and HELPcard.com.

"Safe Harbor" Statement under the Private Securities Litigation Reform Act of 1995: Statements in this news release regarding our business that are not historical facts are "forward-looking statements" that involve risks and uncertainties which could cause actual results to differ materially from those contained in the forward-looking statements.  Such forward-looking statements generally can be identified by the use of forward-looking terminology, such as "believe," "guidance," "outlook," "expect," "will," "expectations," and "trends" and similar terminology.  These risks and uncertainties include factors such as changes in general economic conditions, competition, pricing, legal and regulatory proceedings and investigations, customer privacy, information security, customer demand, the execution and results of our strategy and expense reduction and store closure and consolidation initiatives (including the risk that the costs associated with these initiatives exceeds expectations), risks related to our recent franchisee acquisitions, including the risk that the financial performance from those acquisitions does not meet expectations, the business performance of our franchisees and our relationships with our franchisees; risks related to "virtual" lease-to-own business, the outcome of pilot or test programs with various retailers and the results of efforts to expand its relationships with existing retailer partners and establish new partnerships with additional retailers, increases in lease merchandise write-offs and bad debt expense associated with growth in doors and customers and changes in product mix, and the other risks and uncertainties discussed under "Risk Factors" in the Company's Annual Report on Form 10-K for the fiscal year ended . Statements in this release that are "forward-looking" include without limitation statements about: our expectations regarding the strength of our lease-to-own businesses; the results of our strategic investments, including our acquisition of franchisees; our financial objectives; our expectations regarding revenue and earnings growth due to our investments in the Aaron's ; whether those investments will strengthen our long-term competitive position; our ability to invest in our operations and in opportunities to promote growth; returning capital to our shareholders; the performance of the Progressive lease portfolio and expectations regarding the retail partner pipeline for Progressive; the outcome of the transformation initiatives for the Aaron's Business; the Company's projected results and the 2018 Guidance/Outlook set forth in this press release for the Company on a consolidated basis, and for , the Aaron's Business and DAMI, individually.  You are cautioned not to place undue reliance on these forward-looking statements, which speak only as of the date of this press release.  Except as required by law, the Company undertakes no obligation to update these forward-looking statements to reflect subsequent events or circumstances after the date of this press release.

Use of Non-GAAP Financial Information:

The EBITDA and Adjusted EBITDA figures presented in this press release are calculated as the Company's earnings before interest expense, depreciation on property, plant and equipment, amortization of intangible assets and income taxes.  Adjusted EBITDA also excludes the other adjustments described in the calculation of non-GAAP net earnings above.

Management believes that non-GAAP net earnings, non-GAAP diluted earnings per share, EBITDA and Adjusted EBITDA provide relevant and useful information, and are widely used by analysts, investors and competitors in our industry as well as by our management in assessing both consolidated and business unit performance.

Non-GAAP net earnings and non-GAAP diluted earnings provides management and investors with an understanding of the results from the primary operations of our business by excluding the effects of certain items that generally arose from larger, one-time transactions that are not reflective of the ordinary earnings activity of our operations.  This measure may be useful to an investor in evaluating the underlying operating performance of our business.

EBITDA and Adjusted EBITDA also provides management and investors with an understanding of one aspect of earnings before the impact of investing and financing charges and income taxes.  These measures may be useful to an investor in evaluating our operating performance and liquidity because the measures:

Finally, this press release presents pre-tax, pre-provision loss for DAMI, which is also a supplemental measure not calculated in accordance with GAAP.  Management believes this measure is useful because it gives management and investors an additional, supplemental metric to assess DAMI's underlying operational performance for the period.  Due to the growth of our originated credit card loan portfolio after our acquisition of DAMI, we believe pre-provision, pre-tax loss helps investors to assess DAMI's operating performance until such time as the credit card portfolio reaches levels which management believes will be normal and recurring.  Management uses this measure as one of its bases for strategic planning and forecasting for DAMI.  Our use of pre-provision, pre-tax loss may not be comparable to similar measures disclosed by other companies, because not all companies and analysts calculate these measures in the same manner.

Non-GAAP financial measures, however, should not be used as a substitute for, or considered superior to, measures of financial performance prepared in accordance with GAAP, such as the Company's GAAP basis net earnings and diluted earnings per share and the GAAP earnings before income taxes of the Company's segments, which are also presented in the press release.  Further, we caution investors that amounts presented in accordance with our definitions of non-GAAP net earnings, non-GAAP diluted earnings per share, EBITDA, Adjusted EBITDA and pre-tax, pre-provision loss may not be comparable to similar measures disclosed by other companies, because not all companies and analysts calculate these measures in the same manner.