, /PRNewswire/ --  (NYSE: AAN), a leading omnichannel provider of lease-purchase solutions, and its divisions and , surprised teens on Wednesday with a newly renovated Keystone Teen Center at the . 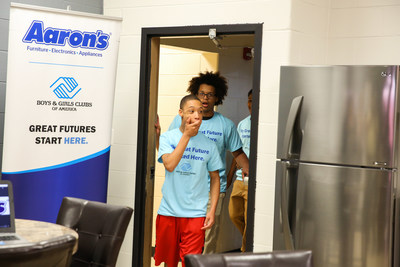 Through a partnership with (BGCA) and input from the teen members, associates and Club officials worked on Monday painting, decorating and furnishing gaming, lounge and leadership programming spaces at the Club. On Wednesday, local associates and Club officials unveiled the new space, which is now equipped with new technology, sectionals, tables and chairs, sound systems and fresh coats of paint. Teens chose the special Sherwin-Williams™ paint colors for the room: Heartthrob, Serious Gray, Black Magic and Alabaster.

" provides a safe and encouraging space for teens to achieve their goals and own their futures," said , CEO of "On our 20th Teen Center renovation, is proud to once again support the by providing these teens with the resources and technology that will allow them to excel as leaders in their community."

Councilman attended the surprise unveiling and addressed the crowd. " has occupied a special place in my heart ever since I accepted my first job with the Club many years ago," he said. "I grew up in and today, my wife and I still call this place home. Thanks to our community partners like , members of the now have a well-equipped space that will inspire them to work hard and chase their dreams."

In 2015, the Aaron's announced a three-year, national partnership with Keystone Program, helping teens develop their character and leadership skills in hopes of helping them reach their potential and creating positive change in the community. teen centers provide members ages 14-18 an environment to plan and participate in activities that focus on community service, academic success, career preparation and teen outreach.

The 19 previous makeovers have included in cities such as , , , , and . The makeover at the includes an additional in-kind retail donation valued at .

"Teens who participate in programs see improvements in grades and graduation rates, preparing them for greater success as young adults," said , Club Director of the and . "With the support of , which has provided a state-of-the-art space for our club with new technology, furniture and appliances, our teens will learn and develop the skills that lead to successful futures."

partnership with BGCA's Keystone Program inspires teens to "Own It" by taking ownership of their choices to build the lives they deserve. The and Keystone Club "Own Your Future" campaign supports three principles:

To see photos of the remodel at the , visit on (www.facebook.com/aaronsinc), on Twitter (www.twitter.com/AaronsInc) and at www.AaronsGives.com.

About
Headquartered in , (NYSE: AAN), is a leading omnichannel provider of lease-purchase solutions. The Aaron's Business engages in the sales and lease ownership and specialty retailing of furniture, consumer electronics, home appliances and accessories through its more than 1,850 Company-operated and franchised stores in 47 states and as well as its e-commerce platform Aarons.com. In addition, , a virtual lease-to-own company, provides lease-purchase solutions through approximately 22,000 retail locations in 46 states. , d/b/a the HELPcard®, provides a variety of second-look credit products that are originated through federally insured banks. For more information, visit investor.aarons.com, Aarons.com, ProgLeasing.com, and HELPcard.com.

About
For more than 100 years, (GreatFutures.org) has enabled young people most in need to achieve great futures as productive, caring, responsible citizens. Today, more than 4,100 Clubs serve nearly 4 million young people through Club membership and community outreach. Clubs are located in cities, towns, public housing and on Native lands throughout the country, and serve military families in BGCA-affiliated Youth Centers on U.S. military installations worldwide. They provide a safe place, caring adult mentors, fun and friendship, and high-impact youth development programs on a daily basis during critical non-school hours. Club programs promote academic success, good character and citizenship, and healthy lifestyles. In a of alumni, 54 percent said the Club saved their lives. National headquarters are located in . Learn more at www.facebook.com/bgca.clubs and https://twitter.com/BGCA_Clubs. 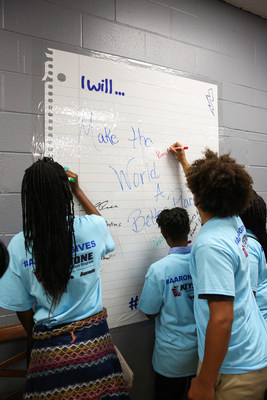 To view the original version on PR Newswire, visit:http://www.prnewswire.com/news-releases/aarons-and-progressive-leasing-unveil-20th-keystone-makeover-for-cincinnati-teens-300443616.html